from Black Tape For A Blue Girl 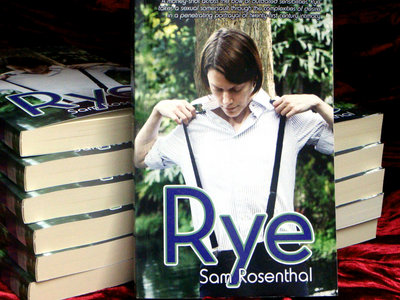 
“Underneath all the androgyny and fluctuation, the book’s about human connection. Rosenthal’s use of sex and gender identities to illustrate how we reach toward and away from relationships is merely a new approach to an old idea: We all need intimacy with others to deepen our understanding of ourselves.”
— Time Out Chicago.

"I spent some time devouring Rye and really really enjoyed not only the story and the characters and the death snark, but also the way that Sam tackled the new thing about relationships. It's the same as it ever was, and it's not the same as it ever was. And that melds so beautifully in Rye. Thanks for the good read!"
— Carol Queen, The Center for Sex and Culture, San Francisco.

Read the first few chapters of Rye by clicking on the book cover above, to ‘Look Inside.’

“Rye is probing — in every sense of the word — in both its critical exploration of gender identity and its display of those personal tensions within real life relationships. It raises plenty of provocative questions about sexuality and polyamory, while telling a pretty good story. Rye is a new insight into queer lifestyles, or at least a more intellectual way to get off.”
— Gay City News, NYC

Orders in the USA are shipped via MEDIA MAIL.

“Rye is like Fifty Shades of Grey if it were written for intelligent adults who actually have sex. With authentic top-bottom, it’s pretty damn hot! Come to think of it, I guess it’s nothing like Fifty Shades.”
— Rain

Includes unlimited streaming of Highlights (name-your-price) via the free Bandcamp app, plus high-quality download in MP3, FLAC and more.

ships out within 3 days
Purchasable with gift card

More merch from Black Tape For A Blue Girl