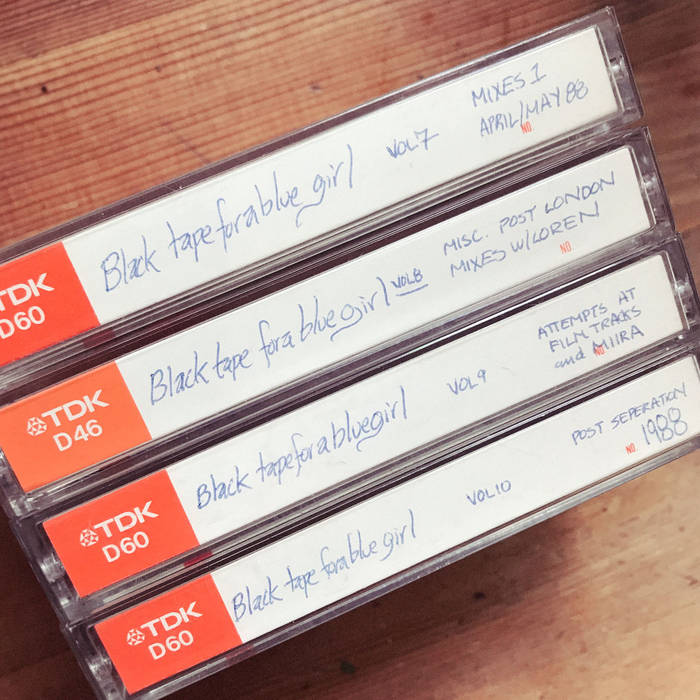 rikm Featuring demos and early versions of tracks recorded around the time of the "Ashes In The Brittle Air" album, along with a few surprises, this demo collection offers a glimpse into the development of what would later become classic works, along with some alternate takes that suggest what may have come to pass in an alternate world.

It's always a treat to share in this kind of overview of the creative process...

This download/stream contain 69 minutes of music from four cassettes, covering the period April 1988-September 1988. It runs from rough mixes for the “first version” of ASHES IN THE BRITTLE AIR through writing new material after I scrapped songs and began again.

Because there were a lot of repeats on these tapes, I’ve removed redundancy that you have heard on previous cassette volumes.


VOL7 Mixes 1 April / May 88
My guess is these pieces off Vol7 were guides to give Sue an idea of the mood and melody of the tracks she was going to sing.

1. Vol7-6 Ashes with my guide
May 8. This has my guide vocals. It sounds like much of the lyrics are there, though the melody is rough. The way I create melodies is to sing, and see what comes out that’s good enough to repeat and refine into the final melody.

2. Vol7-7 Through sky blue
May 8. Loren’s guide vocals. This is the “full version” of the song with the electronics, and sample guitar. Some of these lyrics were kept. When I made the mix for the album, I split this in half for two versions -- the “Through sky blue rooms” you know, and an “alternate version” from the other half of the song, but never released.

3. Vol7-13 Griffith park with my guide
April 15th. This has my guide vocals. I seem to be muttering through the song, so I suspect this is early. My singing gets pretty horrible from 1:35-1:45, YOU ARE WARNED!! ;-) I’ve always wondered who wrote the lyrics to this song. I remember that my motivation when I started writing was, “songs about places are interesting.” Griffith Park is in Los Angeles, has an observatory and science center (which is why the lyric “Tesla Light illuminates” is in the song.) I think maybe Sue improvised bits of the final lyrics.


VOL8 Misc Post Loren & Mixes w/Loren
This is after I came back from London. These are rough mixes before I went in to do the actual 2 track mix.

4. Vol8-1 Ashes acapella
At one time I was thinking the album would start with an acapella mix like this.

5. Vol8-2 Sky Blue
6. Vol8-3 Sky Blue
Here we have the earliest mix of the song in the final form that appears on the album (and a second mix from a few minutes later). The mix you heard at #2 above is all electronics written around a shriek sample, with a bit of guitar buried in the mix. When I recorded with Sue in London, I was still planning for the song to have all the instrumentation like #2. However, while mixing the album I just had enough of this song. If you read the previous cassette descriptions, you know that this is one I kept trying to get “right.” After making the break with Loren I realized the solution was to junk everything and strip the song down to it’s most basic components: just Sue and the acoustic guitar. These versions are both missing the last line, “I never want to lose you.” Was I considering leaving that out? Very odd.

7. Vol8-7 Is it love that dare not be
I really hope Sue got credit for writing this song, because it’s 100% her. (checks booklet) Ok, she did. Good! This is the first mix, and it’s pretty much just like the final version, except there’s a bit of backing vocals from Loren here.

8. Vol8-8 Ashes with Loren
This was mixed with Loren as the lead vocaist, and Sue as backing vocals. As this was called “Ashes (part 2)” on the tape, I think I planned to have the song reprise a few times on the album, with different arrangements of the vocals

9. Vol8-9 I'm spinning
This one was called “Ashes (part 1)” on the tape. I’ve renamed it “I’m spinning” to differentiate it, for the newly mixed version on the bonus disc. There’s a click tracky-drum on this version.

I have a suspicion this tape does not belong at #9 in the series, I feel it’s more likely that these were recorded during/after Mesmerized. I say that because the date on side 1 is June 1st and side 2 is Sept 22; which doesn’t fall neatly in sequence. And the tracks just don’t sound like what I’d have been working on at this point in the Ashes album. And the title about “Film tracks” seems out of place from where my head was at. Anyway…

10. Vol9-1 Egyptian
All the synths sound like the ESQ-1. The drum is the HR16. This is something I wrote into the sequencer that most likely it never hit audio tape,

11. Vol9-2 Reichy
ESQ-1 only, played from the sequencer. One keyboard part on top sounds like it’s played live over the backing track.

12. Vol9-3 Reject
13. Vol9-4 Michael's song
Who was Michael? Why does he get a song? No idea! Some of #12 seems to be contained within #13. The drum sequencing was a bit more advance than I usually programmed on BlackTape songs; trying to sound like a human drummer. And some blasty guitar sounding synths. Is there an earlier version of this on one of the cassettes?

14. Vol9-5 Mission Impossible
What the hell!?! This one doesn’t even sound like me! I think I remember writing this on a casio they had in the TV/film department at College. It had pre-programmed drum patches, which is why they sound more organized/traditional then what you usually hear in my music. I wonder if by “film music” I was trying to make soundtracks for the student films people were working on in class? The note on the cassette says Sept 22. I was already graduated at that point, which is another reason why I suspect this is 1987, not 1988. Another example of Dave Ball being an influence that nobody ever heard. :)

15. Vol9-7 Loren's song
This is a song of Loren’s that I must have recorded to 8-track for him. It is most likely one take live.

This cassette is when I started writing / restructuring new pieces to replace the tracks with Loren that I cut from the album.

16. Vol10-4 our flesh
Aug 5 - The full name of this song was probably “Our flesh as one,” a lyric from “Seireenien Lumoama” off MESMERIZED. I suspect this instrumental could have worked out to fit the mood of ASHES. This is all ESQ-1.

17. Vol10-5 Angry ambient / am i so deceived
Aug 7 – An early mix with my parts of the song, before Carmella came over and added her violins. The intro is a bit longer then the final version. It’s all in the ESQ-1, but has a nice organic sound that is usually missing from that synth. It was the first in a series of “Angry ambient” songs that ran from ASHES through REMNANTS.

19. Vol10-7 You tangle within me
Aug 14 - I took the track that was called “Ashes (part 1)” (“I’m spinning”) and started over, keeping the chords, but making something 90% new. This mix is all ESQ-1 & HR16, before I laid in portions of Sue’s vocals. I hear a bit of David Sylvian-style in it, in that higher synth sound (such as at 1:48-1:50) which plays three descending notes over the top; also in the feeling of the drum pattern.

20. Vol10-8 The touch + the darkness
Sept 1 – Another new song to replace something I cut. This first mix is very close to the final mix.

21. Vol10-9 From the tightrope (end with sue)
Sept 3 – We’ve heard this song on previous cassettes, when it was an extra piece that wasn’t going on the album. I brought it back, when I was looking for material. This a test of the final couple minutes, where I layered in some Sue vocals (with long backwards delay) appropriated from a different track.