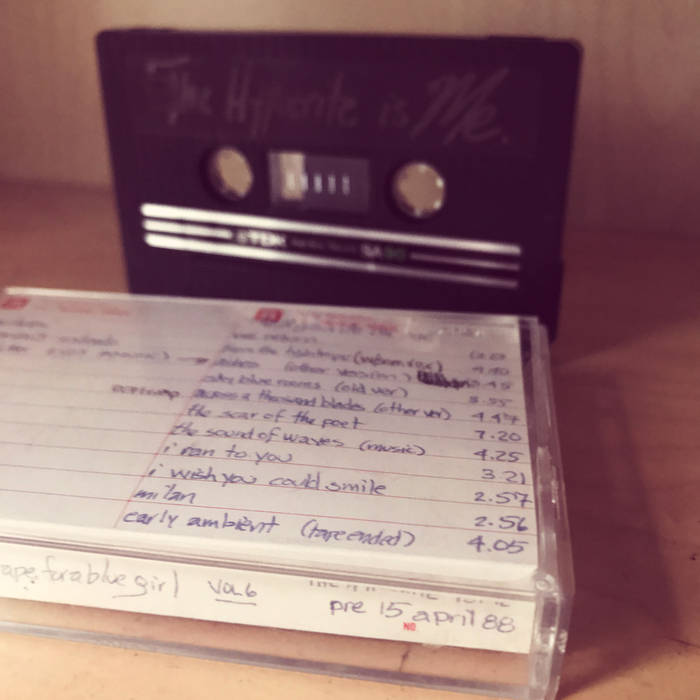 rikm Further explorations in the development of the classic "Ashes in the Brittle Air" release, these early demos offer a fascinating glimpse into the creative process and how the album eventually took form. Quite an interesting and engaging listen!

This is Cassette Vol 6, "THE HYPOCRITE IS ME pre 15 april 88." It contains early demos and rough mixes for ASHES IN THE BRITTLE AIR. Included are 4 tracks that are unreleased in any form. It’s a 90-minute TDK SA High Bias cassette. Enjoy another slice of archeological history!

On this tape, tracks for ASHES are coming together. The 2nd side of the card, and the shell, as labeled “The Hypocrite is Me.” I was thinking of that for the name of the album, it seems. My notes below aren’t as extensive as last time, as the pieces were detailed when they first appeared on the previous tape, blacktapeforabluegirl.bandcamp.com/album/cassette-vol-4-5-pre-ashes-1987

1 Vol6-1 "structures”
This is a “cover version” of Steve Roach’s “Structures From Silence,” an homage to Steve’s album. I think this was all played into the sequencer of Walter’s ESQ-1, as I don’t hear my Poly-61.

2 Vol6-2 seireenien3 - extendo
I’m not sure why I was trying to make an extended version of the third part of MESMERIZED’s “Seireenien Lumoama,” but here it is!

3 Vol6-3 could I stay (early)
This track was called “ashes (other version)” on the card - though it eventually became “could I stay the honest one” on the next album, A CHAOS OF DESIRE. The Vol5-8 version is a better mix, but this one has me singing some guide lyrics that were never used.

4 Vol6-4 i'm spinning (with click)
At one time, this was going to be the 2nd half of a suite version of “Ashes in the brittle air.” Recently, I renamed it “I’m spinning” for clarity, as it will be appearing on the bonus disc. At 1:29, the synth part I play is slightly different from what’s on the final, and I notice that lead part throughout the song was replaced on the final. I think at the time I was planning on keeping those drums, but they sort of drag the song down to earth. The version without drums is better.

5 Vol6-5 ashes with loren guide
You can hear more of the sound effects at the start that were pushed down in the mix; and then Loren’s vocal performance (which wasn’t used on the album). At one time, “Ashes in the brittle air” was going to have dual lead vocals from Loren + Sue-Kenny. That distracting triangle towards the end was removed, thankfully.

6 Vol6-6 i ran to you
On the cassette “ashes” flows directly into “I ran to you,” I was thinking of it as a 3-part suite (spinning-ashes dual vocals – I ran to you). I am surprised that this song existed at this point, as I thought I wrote it after I had scrapped the first version of the album. My vocals begin during the fade out.

7 Vol6-7 (unnamed synth)
Oh no, it’s another synth-pop-adjacent track. This must be my Moog + Poly-61, which is why it’s sonically so different from the tracks that precede it on the cassette.

8 Vol6-8 baby doll (soft cell)
For some reason, I was trying to make a cover of Soft Cell’s track from their 1983 2nd album, THE ART OF FALLING APART. “Kickstart the heart that's so hard to find“ Original: open.spotify.com/track/7uM5utrw584CFtKTSugz6p

This is the B-side of the cassette:

9 Vol6-9 we return
Another mix of this track, slight differences from Vol5-1. Guitar and vocals loud, music almost nonexistent. Synth solo at 1:30 has a few errors. Vocals at 2:00 are slightly different. Walter’s guitar solo is not at 2:22 yet.

10 Vol6-10 from the tightrope (w/sam vox)
The Vol5-9 version went a different direction mid-way through the song, with Walter’s guitar and such. Here, the 2nd half has been re-recorded, it’s more like the way it appeared on the album.

11 Vol6-12 sky blue rooms (old ver)
We were still at it, trying to figure out how to make this song ok. There are small touches different from the previous mix. Drum beats, etc. I was frustrated with this song, it felt to me like we kept throwing things at it, trying to make it work, when the problem was it’s just a hodge-podge of sounds and ideas. From the ground up, it just wasn’t working. You know what I eventually did to save it!

12 vol6-13 across a thousand blades (other ver) (DCD trump)
I named this track “Across a thousand blades” even though nothing in the music is the same as the track on the album (“DCD trump” means ‘Dead Can Dance trumpets’). I discussed this piece in depth here: blacktapeforabluegirl.bandcamp.com/album/across-a-thousand-blades-demos-live


13 vol6-14 the scar of a poet
Following the vol5-13 version, sound effects and Loren’s vocals have been added. Yes, Loren was originally the vocalist on this song. I’d say Loren provided an improved version of my guide vocals, but Oscar is the one who nailed this song and gave it passion!

14 vol6-15 the sound of waves (music)
This was the first time I played guitar (it was Walter’s). I hear a few strums and notes in this mix that I later erased. It is so funny what memory does to you: I was convinced this was the 3rd of 4th song I created with Loren for the ASHES album, but it’s actually much later than that.

15 vol6-16 i ran to you
Man! This mix is so close to the final mix on the album. I think creating music is like being an athelete. You get out of shape if you’re not doing it all the time, and then you need to get out on the track, and get yourself back up to snuff. And when you’re in shape, songs come out of you nearly finished, like this one.

16 vol6-17 i wish you could smile
We really nailed this one, the first mix is so close to the final mix. That shows what I’m saying about getting back in shape, and also that by this time I knew what Loren’s strong-points were, and I wrote this lovely song for him to sing. Instead of rehashing “sky blue rooms” we should have been making new songs together. Also, look at that: “I ran” followed by “I wish” is the album order.

17 vol6-18 milan
Another song I thought came earlier in the process. This one was brought in by Loren, pretty much in this form. I recorded it, produced, added the one simple synth line.. I’ve always loved this track. I asked Loren a few years ago if he ever released it, and he said No. He’s never released an album. I’m glad I saved it, and that it will be on ASHES disc 2 for everyone to hear. The final mix is sounding fabulous! None of the distortion that’s on this cassette.

18 vol6-19 early ambient (tape ended)
Volume 6 began with something ambient-ish, cool to end with another ambient track. “tape ended” had to do with the ½-inch 8-track tape running out in the middle of the piece, when I was recording it.