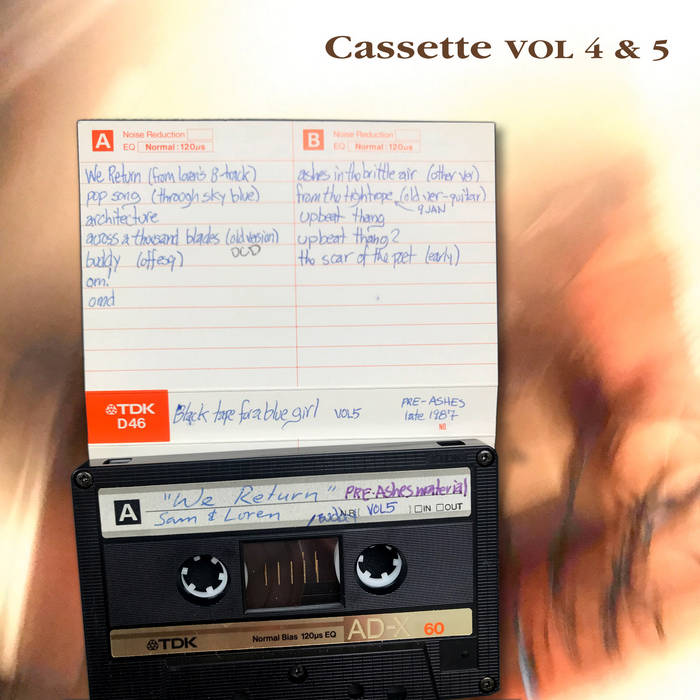 rikm A fascinating insight into the creative process, a rare and intriguing aural opportunity to hear the development of an iconic album from it's earliest stages.

Scott Hearing these tracks is such a treat! I'm definitely getting my money's worth for my Black tape for a blue girl subscription here at Bandcamp. Favorite track: Vol4-4 through sky blue.

Comments on Cassette 4+5
Back in the day, I’d make myself these quick cassette mixes so I could listen to in-progress songs away from the studio. I was recording at Walter Holland’s house on his ½” 8-track, and at my college on the 8-track in their communication department. I am amazed how well these cassettes have stood the test of time, considering they weren’t the best quality TDK tape, and over the years they were often stored in hot or humid environments. To save space, I have removed 3 songs that are near exact duplicates and reveal nothing new.

For comparison, there are 1988 first version mixes of some tracks here:
blacktapeforabluegirl.bandcamp.com/album/ashes-in-the-brittle-air-the-unreleased-first-version-unmastered

1 Vol4-1 om!
This one never evolved into anything. The lead synth reminds me of things I played on the MESMERIZED album. I think I was recording that lead line live to the 8-track, trying to write a melody for the song. The drum machine could have been there to keep the beat, I might have planned to remove it.


2 Vol4-2 Across a thousand ((other version)
This is the same track that I included as #2 here: blacktapeforabluegirl.bandcamp.com/album/across-a-thousand-blades-demos-live My memory has always told me that I wrote “blades” quickly one afternoon, in preparation for a trip back to Florida to record with Oscar. However the cassette vaults reveal something odd. This tape from late-87 has "Across a thousand blades" written on it. So! Turns out “Blades” didn’t spring to life, fully formed. I was thinking about it from very early in writing new material. However, what you hear has nothing to do with the song you know; perhaps there's something familiar in the Emax horns, but nothing really carries through to the final version except for the title.

3. Vol4-3 We Return
I recall I met Loren through a fan letter he wrote me; he had recorded a demo singing “We Return” over the track “The Return” off my 1984 TANZMUSIK album, and wanted to play it for me. I have a vague memory of our first meeting when he dropped by the audio department of my college so we could put his 8-track on the machine and give it a spin. I was intrigued. This is not the same “We return” that’s the last track on THE ROPE, this is an instrumental version of what we were working on. There’s a synth that starts at :50 that’s not on the final recording. That ending synth, oy! Can you tell I was still listening to synth pop?

4. Vol4-4 the amber girl (through sky blue rooms)
When you listen to the final version of this song on the ASHES album, you might have guessed that Sue-Kenny and I made it up on the spot in the studio in England, it sounds so natural and spontaneous. Actually, this was a song that went through more revisions than anything else on the ASHES album. This early recording is all electronic, no acoustic guitar or vocals (though it was called “the amber girl” at this time, a name I had already used on BEFORE THE BUILDINGS FELL.) I don’t know where I got that electric guitar sample, but it sounds like I formed the basis of the song by looping it on my sampler/delay foot pedal, triggering it with my Dr. Rhythm drum machine. This first demo is much longer than the final version, and goes on and on in a synthpop sort of way. There are two halves to the song, which were split later into the album version of “sky blue rooms” and an alternate version that will be one of the bonuses in the 2CD Kickstarter edition. This version is a minute longer than track #14 here -- blacktapeforabluegirl.bandcamp.com/album/ashes-in-the-brittle-air-the-unreleased-first-version-unmastered -- which (at the time I made that comp) I believed was the earliest version I still had a copy of.

5. Vol4-5 buddy
When I write “buddy,” it’s a reference to Harold Budd; that was a term I would use for tracks that were piano-based and minimal. This was never recorded to 8-track, only recorded into the sequencer of Walter’s ESQ-1; the sounds are all very specific to the ESQ’s mid-80s digital sequencer. At the time I probably thought, “This is sounding too new age!” Today, I think there’s a nice mood, though it’s repetitive and would have required more development. Or it could have served as a minute-long segue between other pieces.

Now we go to the next cassette. Vol 5, which has “Pre-Ashes late 1987” written on it (it’s the cover image for this download)

6. Vol5-1 We return
This version has elements that are different from the Vol4 or the final version. Loren’s vocals are on it. It’s almost a minute shorter. In the first chorus, at :36, there’s a “Whip It”-like drum crack. The spoken part at :58 is longer than the final version, and there’s additional backing vocals there. The synth solo at 1:25 is a different synth patch / melody from the one I play on the first version mix; I am guessing Loren might have played this, as the one I played on the final has more of a The Smiths melody. 1:56 backing vocals are different.

*(added an hour later) Something interesting occurs to me as I look at the image I created for this collection. That blue-ink handwriting on the cassette sticker is not mine (mine is the purple, and the tape card.) That must be Loren’s, which means this cassette I’m holding in my hand is most likely the DEMO Loren sent me, that I later recorded additional tracks on. Which means THIS VERSION is actually the oldest version, vs the one that’s “Vol4-3” here. Listening to this mix more closely, I actually hear surface noise from the LP at the beginning. Loren recorded the vinyl to his 8-track, and then added the vocals and instruments. That would explain why this version is shorter than the first version mix (that I’ve been remixing for disc 2). This is the demo. Later, we started over in my studio. So listen carefully and compare, because this is a different performance by Loren, though my backing tracks are mostly the same. I feel proud that I sleuthed this out about this track.

7. Vol5-2 pop song (through sky blue)
As I wrote above, this is a song that I kept coming back to, trying to figure out what would make it salvageable. Oh no! Total Gary Numan lead at :31! I always felt these evolutions were me throwing in the kitchen-sink, trying to come up with something to make the song work. That Gary Numan-influence is back a number of times as the song continues; I’m thinking there’s some of my love for Soft Cell in this, though I don’t know if anyone hears that besides me? As you can guess, I wasn’t particularly happy with the revisions here, as they all got erased.

8. Vol5-3 Architecture 04:36
“Architecture” is used as a reference to Orchestral Manoeuvres in the Dark’s ARCHITECTURE & MORALITY album. Do you hear a connection? I don’t. The synth sounds are quite similar to MESMERIZED. That drum beat? It doesn’t sound like my Dr. Rhythm. I might have programmed that on Walter’s HR-16? It’s not a sample, because at that time I didn’t have a sampler. This piece was probably recorded to 8-track, as some of the synths sound like my Poly-61. As Iistening to this in 2019, I started out annoyed; by the end I thought, “Yeah, that could have gone somewhere.”

9. Vol5-7 omd 01:39
Yes, “omd” is a reference to Orchestral Manoeuvres in the Dark. Oh sure, the lead synth sounds have an OMD-flavor. This was all played within the sequencer of Walter’s ESQ-1, considering the sound patches I’m using. I think there’s a bit of a Peter Gabriel influence, too. It’s a sketch of an idea that I never took up again.

10. Vol5-8 could i stay (called “ashes in the brittle air (other ver)” on card)
Interesting to find this here! “Could I stay the honest one” was later worked up and finished for A CHAOS OF DESIRE. I didn’t recall I had written it this early. This mix is all in the ESQ-1. I believe it’s the first time I wrote “Ashes in the brittle air” on something, so I liked the title more than the song at that time. Sometimes I wonder, “Why did I pick this song to finish and that song to scrap?” Would you say – hearing this demo -- that there’s enough to indicate it would evolve into the wonderful track we know? Thinking about it, I suppose it’s the mood that made it worth continuing. The mood is already present, even in this demo form.

11. Vol5-9 from the tightrope (old ver – guitar 9 jan)
This is a song that wasn’t included on the first version of ASHES. It’s interesting to discover I had written it, set it aside, and then came back to it and reworked it when I needed tracks to replace the ones I cut. When I reworked this track for the album, I completely buried my vocals because (a) it was me singing and (b) the lyrics weren’t that exciting to me anymore; and there’s a bunch of synth parts in the first 2 minutes that I later cut or buried. If you compare this with the version on Ashes, blacktapeforabluegirl.bandcamp.com/track/from-the-tightrope they head to completely different places after 2 minutes. I like that acoustic guitar that starts at 2:25. I’m guessing that’s Walter, as it fits his style.

13. Vol5-11 upbeat 02:46
Turns out I used that same drum patch from “We return” on this synthpop piece. It probably served as a click track. Typing that in, I think it’s possible this was played live, as it sounds like two hands playing, doesn’t it?

14. Vol5-12 upbeat 2
Whoa! What is that sample!?! This and the previous piece would have been sooooo out of place on ASHES. You can tell I was thinking I could write a synthpop song; probably with the idea that a catchy song would be more “accessible” for college radio, etc. I tried different approaches to see if I could get there, no luck. It reminds me that this was a big part of my problem with the way ASHES was progressing at the time -- I thought it needed synthpop tracks!? I think giving up on that was the right approach. A synthpop side-project could have been an idea; it just wasn’t BlackTape. I don’t have much to say on these two tracks, as they’re rightfully rejects.

15. Vol5-13 scar of a poet
And then we end on a demo that turned out to be a complete winner! This is the earliest mix of “the scar of the poet.” It’s almost 2 minutes shorter than the album version, but all the components are there for the vocal section of the song.