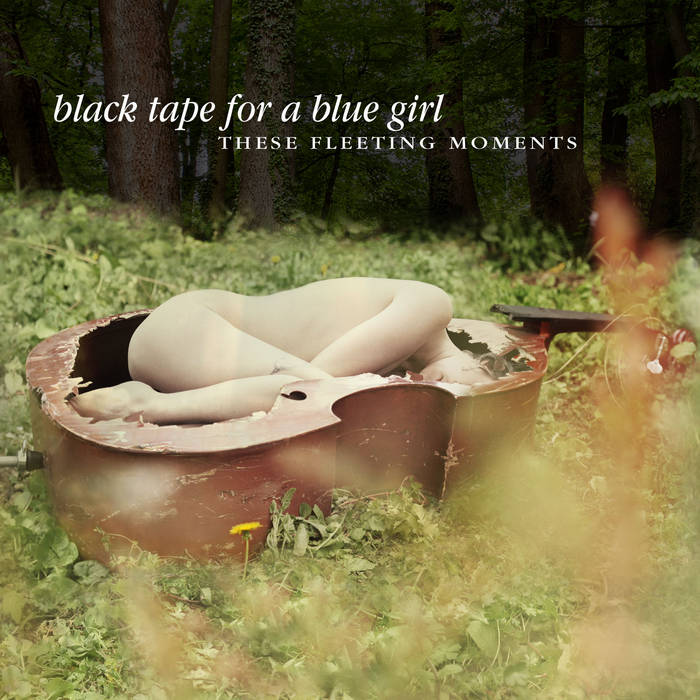 Matthew Adlard Newly discovered band for me so this was a blind purchase. Found it to be a stirring and deeply philosophical work. The soundscapes are great and the instrumental tracks add some variety. Favorite track: You're inside me.

rikm On "These Fleeting Moments", Black Tape For A Blue Girl have crafted a beautiful and emotional collection of songs with an epic and cinematic feel, an expansive sound that conjures images of vast spaces and wide open vistas, yet remains intimate and personal, an emotional and resonant release that draws the listener deeper under it's spell with every play.

Scott I love the variety of musical styles and lyrical content...every song is engaging. Sam, you and the band have really created something special here! I'm still having trouble picking a single favorite song. Easily my favorite album of the year, indeed the past several years. Favorite track: She's gone.

These Fleeting Moments, their 11th studio release, is 70 minutes of powerful, gorgeously yearning tracks born from the same place as their 90s classics Remnants of a Deeper Purity and A Chaos of Desire.

“For this album,” Sam says, “I picked up threads of our 90s sound. I wrote those intense, passionate songs that Oscar delivers so wonderfully. Adding Nick’s breathtaking strings atop my synth-horn and electronic textures, and writing 25 minutes of instrumentals, really brings this album back to the essential Blacktape sound.”

Oscar’s involvement is more than a nostalgic appearance — he sings seven songs. Accompanying Oscar is his daughter Dani, who was not even a year old when the band recorded their 1986 debut, The Rope. Her lead vocals on four tracks bring an absorbing intermingling of voices to this release. At times Dani’s singing carries a youthful, breathy softness, such as on the brokenheartedness of “She’s gone.” “She wasn’t the first girl to dump me, but she dumped me on the phone, and it brought out all these old feelings. Who would love me and just drop me unless I didn’t deserve love. Unless I didn’t deserve love.”

The band boldly opens the album with “The vastness of life,” a 17-minute five-part epic reminiscent of Remnants’ “For you will burn your wings upon the sun.” It’s an expressive track — powerfully solemn, stirringly elegant and evocative — drifting between defiant, resigned and striking vocal sections and floating ambient passages. The lyrics explore the album’s theme: questions about life choices, our personal story, and if we have the courage to live in service to our ideals.

The album’s lyrics range from emotionally wrought to delicately sensitive, detailing fears of revealing the true self, betrayal of one’s body in the hands of a lover’s promises, contemplating our interconnectedness to others, or poking fun at mankind’s belief that we are more important than other animals.
Sam continues, “The fleetingness of time has become part of the questions I am asking. We are finite in our being but infinite in our hopes and longings. Life will pass us in an instant, and I ask myself if I am courageously living my true self in the world? Or are we all a bit hunched over, hiding from the possibilities?”

After three decades recording music and running the Projekt record label, Sam drew upon internationally-acclaimed talent to record the album. Guest musicians include The Dresden Dolls’ drummer Brian Viglione, SoulWhirlingSomewhere’s vocalist Michael Plaster, and electronic solo artists Erik Wøllo and Mark Seelig. Newcomer Chase Dobson adds guitars and bass.
In the catchiest track, the luxuriant “Limitless,” Oscar sings, “I shine, I glow, I venture into the darkness in search of the essential.” Sam’s thought-provoking lyrics invite self-examination without becoming too weighty — the earnest themes explored on the album have a palatable sense of optimism in the face of adversity and are buoyed by the ebb and flow of the band’s superb performances. Indeed, These Fleeting Moments finishes on a high note, a song sung from father to son on the elder’s death bed; even in that, there is the suggestion that a way through can be found by remembering that “the most beautiful moments remain so dear to us.”

The deluxe CD edition and double-lp vinyl edition were funded at Kickstarter. kck.st/1NAqsMO Thanks so much to all my supporters.

I appreciate all your enthusiasm for my music over the past 30 years. Thanks,