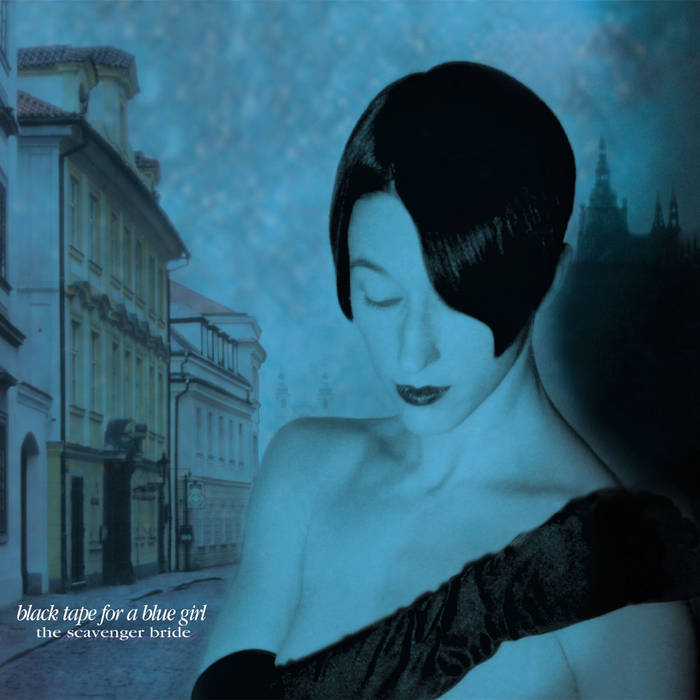 Scott This album contains an entire world to become immersed in. Elysabeth's singing in Bastille Day is phenomenal--it's one of the most affecting songs I have ever heard. Favorite track: bastille day, 1961.

rikm A longtime personal favorite in the Black Tape for a Blue Girl catalogue, "The Scavenger Bride" is a truly impressive release, deeply evocative and powerfully emotional.

“Like Dead Can Dance, black tape for a blue girl dramatically flirts with symphonic decay.” The Philadelphia City Paper

Sixteen years after its debut, black tape for a blue girl is one of the most successful and beloved bands within the ethereal gothic genre, while also engaging fans of elegant, artistic music. Their eighth release is a lovingly crafted concept album set in 1913 Prague; guest appearances from members of Unto Ashes, Audra, Judith, Spahn Ranch and a former member of Rasputina enliven the thirteen bewitching tracks. This album is like nothing you’ve heard before, yet these emotionally intense songs are classic black tape for a blue girl.

All Music Guide, Ned Raggett:
In part an extension of Black Tape’s previous album As One Aflame, Laid Bare by Desire, thanks to the continued inspiration of Marcel Duchamp, the excellent and captivating The Scavenger Bride is the first record by Sam Rosenthal and company explicitly conceived and performed as a uniform piece. It’s a concept album, though without the baggage that such a term normally brings, thanks to the varied performances throughout the record tied into the overall Black Tape aesthetic. Noted Czech author Franz Kafka is perhaps the key source for The Scavenger Bride‘s tale of a woman and her past lovers, while everyone from actor Klaus Kinski to Sonic Youth also provides some of the artistic focus for Rosenthal. Indeed, one of the highlights is “Shadow of a Doubt,” one of Sonic Youth ‘s finest early numbers, its breathless, nerve-tingling energy beautifully translated into a combination of piano, drums, viola and vocals, the last two delivered with dramatic panache by new member Elysabeth Grant. The core band of five this time features Rosenthal and returning members Feuer and Richards on flute and violin respectively, rounded out by cellist Julia Kent and Grant – interestingly, long time vocalist Oscar Herrera doesn’t feature once on the record. With the drowned, cascading wash of sound familiar from Black Tape in general achieving a new strength on songs like “The Scavenger’s Daughter” and “Das Liselottenbett,” the band is further assisted by a slew of fellow Projekt artists and similarly minded souls. Michael Laird from Unto Ashes adds dashes of medieval dance turns via percussion and mandolin throughout – check out the entrancing “All My Lovers,” also featuring Audra’s Bret Helm backing Grant on vocals – while Steve Roach, Athan Maroulis from Spahn Ranch, Martin Bowes from Attrition and Christopher David from Judith further add to the album’s serenely mysterious flow. Keep an ear out for Helm’s lead turn on “The Lie Which Refuses to Die,” which uses seemingly mundane imagery in quite a striking fashion.

Alternative Press #168 (July 2002), Mark Burbey:
Kafkaesque disc avoids concept-album pitfalls to emerge as a true work of art. | 9 out of 10 | Listening to The Scavenger Bride by Black Tape for a Blue Girl is like sitting in a cathedral of mindful gloom, feeling at once melancholy and reassured. Sam Rosenthal continues to be inspired by the art of Marcel Duchamp, while author Franz Kafka serves as muse for this concept album set in 1913 Prague. The title track is a cinematic overture, a portent of the artful blending of goth, ambient and chamber music to follow. Rich, timeless vocals by Elysabeth Grant, Bret Helm, and others breathe dark life into the passionate lyrics, but it’s the instrumental passages-with flute by Lisa Feuer, violin by Vicki Richards, cello by Julia Kent and electronics by Rosenthal-that burrow deep with the greatest poignancy. Comparisons with Dead Can Dance have become tiresome and inaccurate, for what Rosenthal is doing here is more original and singular in its ability to touch the listener both emotionally and intellectually.