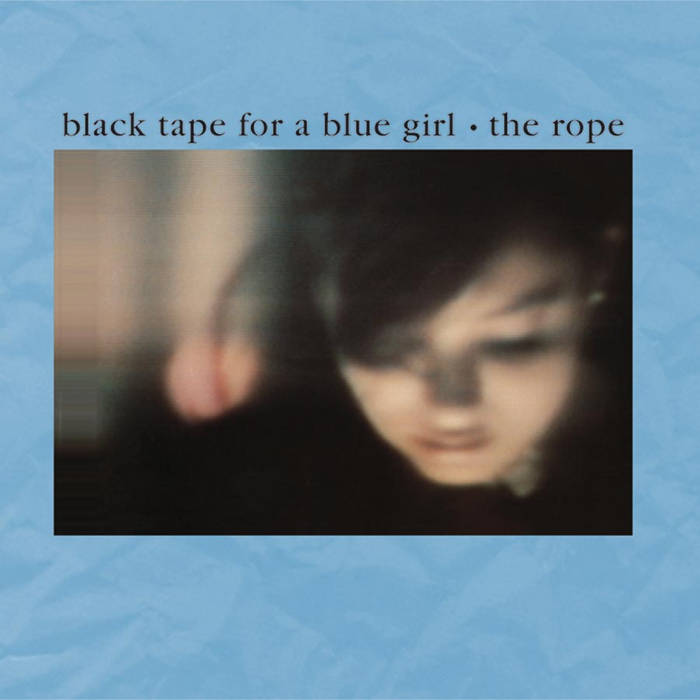 realmshifter I remember following what Sam and Projekt were releasing way back in the early 1990s... It's truly inspiring seeing Sam still at it with the same intense creative drive after all these years. All the other artists' versions of Black Tape songs really make this an extra special release.

rikm For this deluxe edition of their first release, Black Tape For A Blue Girl have not only remastered the original album, but also invited a number of other artists, including Mirabilis, Attrition, Forrest Fang, and more to share their own covers and interpretations of the album's songs.

On the debut . . . Sam Rosenthal’s subtle electronics and introspective lyrics establish black tape for a blue girl’s stature beyond the realm of the normal “gothic” sound. Creating a timeless blend of Oscar’s emotional vocals intertwined with warm ambient soundscapes.

In 1986, Black Tape For A Blue Girl’s darkly mesmerizing debut The Rope appeared on the underground rock scene. It kicked off a rich and diverse musical career for Projekt founder / Blacktape songwriter Sam Rosenthal. Now 25 years later, Projekt celebrates this momentous anniversary with The Rope 25, a 2-CD set including The Rope re-mastered and a bonus disc of current Projekt artists’ reinterpretations of the material. Eight-page lyrics booklet included while supplies last, so order now!

Rosenthal’s electronics coupled with his angst-filled, introspective lyrics established Black Tape For A Blue Girl’s position beyond the traditional “gothic” sound. His lyrics overflow with the emptiness of a shattered soul and broken heart revealing a dark, tortured man scanning the wreckage in search of love, understanding, and connection. The timeless blend of Oscar Herrera’s passionate vocals intertwining with warm electronic soundscapes and soothing ambient passages creates an album similiar to 80’s-era releases on 4AD and Factory Records.

Opening the album is the rhythmic, hard-hitting “Memory Uncaring Friend,” along the lines of Peter Murphy or Gang of Four. Following this striking opener, the music takes a more subtle turn: gently disorienting, autumnal, mesmerizing, mournful, full of wonder and elusive grandeur. Upon The Rope‘s release, comparisons were made to Cocteau Twins, Brian Eno, Phillip Glass and Chris & Cosey.

In 1986, Star Hits magazine wrote, “Black Tape For A Blue Girl’s The Rope is like the musical equivalent of a nervous breakdown. Complete with dark, scary lyrics that make The Smiths sound like Alvin and the Chipmunks, this might give you an idea of what mental anguish sounds like. It is an experiment worth hearing.” Option Magazine speculated, “The lyrics are of a masochistic nature, which reflects a probable suicide in the writer’s future. Sung by and for those in love with self-misery.” Many of the lyrics (and accompanying stories with the instrumentals) on The Rope dwell upon suicide as a response to a lack of love; an attempt to derive affirmation after the writer had left. “I cared for you more than you ever knew, I do this to show you now.” Oscar sings on the title track. “I see my answer on the end of a rope, the world turned cold for me.” While the final song – “We Return” – looks to others in a similar situation as a solace for the pain and emptiness. ”From the black house, we return. Clutching secrets, we must learn.” A glimmer of hope.

On Disc 2, the current Black Tape For A Blue Girl line-up performs “Memory, Uncaring Friend” as a driving rock song, equal parts Bauhaus, Gary Numan and a darkly-caffeinated Sinatra. “Working with Brian of the Dresden Dolls on drums and guitar,” Rosenthal says, “we captured the song as I would have performed it if live in ’86. It’s aggressive, brash, tense and loud! All elements that a song about betrayal and self-destruction require. Athan Maroulis’ vocals reflect back to Oscar’s performance while giving the song new drama and immediacy.”

Other equally innovative reinterpretations include All My Faith Lost’s neo-classical “The Rope,” Mirabilis’ haunting a capella “The Floor Was Hard But Home,” Lux Interna’s neo-folk “We Return,” Attrition’s dark, electronic ”Memory, Uncaring Friend,” and Erik Wollo’s electronic/soundtracky “Within These Walls.” A poignant moment is when Walter Holland re-works the original multi-track recording of “Seven Days til Sunrise,” as this track features the clarinet of his late musical partner Richard Watson from the band Amber Route. Hand-picked and sequenced by Rosenthal, this second disc looks back at The Rope while projecting the songs into modern times.

Allmusic.com: ”The debut Black Tape album, especially in light of the band’s later efforts, makes for an interesting listen in retrospect. On the one hand, much of what would make Black Tape so distinct is already in place: vocalist Oscar Herrera’s passionate interpretation of Rosenthal’s romantically obsessed lyrics, Rosenthal’s own moody, haunting contributions on keyboards, atmospheric instrumental pieces, and more. (However) the sheer depth of later Black Tape music makes the comparatively less full arrangements here sound more like demos. By no means is this criticism, it’s just that those expecting the Black Tape aesthetic to have been fully formed from the start will be initially surprised with The Rope, but will find its charms to be plentiful in the end.”

TECHNICAL DETAILS, SAM WRITES: The Rope was recorded on a borrowed Fostek cassette porta-studio when I was a college student in Southern California. All the electronics were performed on my Korg Poly61. A Moog Realistic Concertmate MG-1 was used for the leads on “Memory, Uncaring Friend” and “The Few Remaining Threads.” The reason I did not use the Moog on more songs was that it was in Florida at my parent’s house. Those Moog parts were added near the end, when I was back home in Florida for the summer to record Oscar’s vocals.” I have the recollection that “Memory” came together in about three hours; music, lyrics and everything; Allan’s drums and guitar were recorded in his garage in an afternoon, each with a single microphone. Oscar’s vocals were recorded in his living room, while his baby daughter slept (and occasionally cried) upstairs. The Rope was mixed in three hours. Yeah, three hours! Now I spend 20 – 40 hours mixing just one song. I had no idea that I was rushing things! The song “Within These Walls” begins with a sample of drums from the Attrition song “Mind Drop,” so it’s interesting to have Attrition returning the favor with their cover of “Memory” on Disc 2. The Rope was originally released on vinyl, later on cassette and then CD. The original 2-track 1/4″ masters were sent to Canada to get baked and transferred to digital. “Memory, Uncaring Friend” was re-mastered by Al Ursini at Studio Chicago. The rest of the album was mastered here at my studio. Of course there are limitations because the album was recorded on 4-track; often all the music was mashed down to one track, to make room for the vocals and instruments. Re-mastering is a chance to make the album sound a bit more modern as far as the levels go. Yet, as many fans tell me The Rope is their favorite album, I did not do anything to drastically alter the sound. I stayed faithful to the original and cleaned things up, eqed some of the sounds to make them more present, and – just like the listener – re-experienced Black Tape For A Blue Girl of 25 years ago.