by As Lonely As Dave Bowman 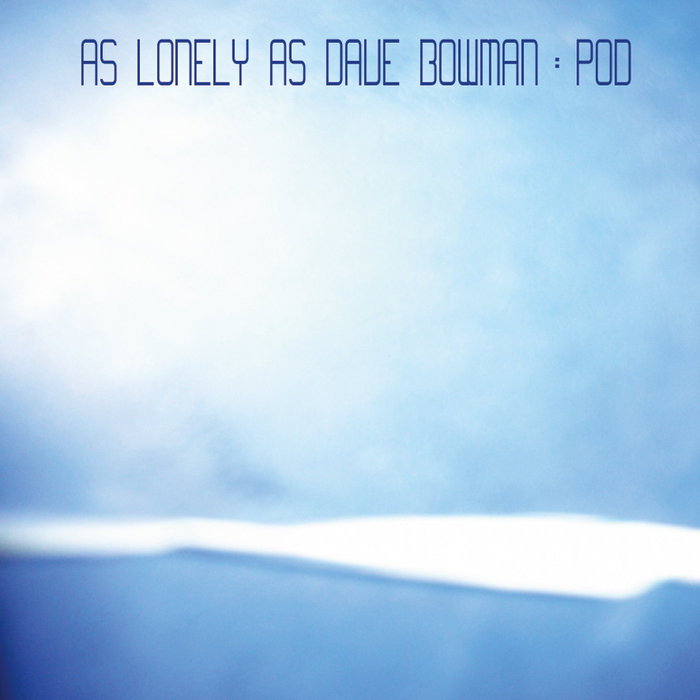 
-------A review from Tokafi.com:-------
A flesh-made emotional construct: Sam Rosenthal is looking for primordial, hormonal reactions. From a dramaturgical point of view, Haywood Floyd should have been the main protagonist. He is the first character to be introduced, he presents us with the outlines of the plot and leads the story to its first climax. In stark contrast with almost anyone else in the movie, he actually has a few lines of dialogue. But when I think of 2001, all I see is a small white capsule marking time in space against a pitch black backdrop, the red dots and yellow lines reflecting on Dave Bowman's helmet and that simple and startlingly short line: "Open the pod doors, Hal." So, too, it appears, does Sam Rosenthal.

As a first interpretation, POD is therefore his personal tribute to Kubrick's seminal vision of space, as well as its decidedly less groundbreaking follow-up 2010: The Year We Make Contact. Just like the director's masterstroke, the album is both to be seen as a visual and sonic work. Motivated by playfully and intuitively taken pictures of his young son, the cover artwork served as the initial stimulus for the compositions, which Rosenthal wanted to be equally free and without concrete associations. The natural consequence was to lay the emphasis on sound, not structure and to replace all notions of melody with a strict focus on dense, multilayered complexes of shifting harmonies. Drones are subsequently the beating heart of "Pod“, which sways between three basic mood poles: Fear/Desperation, Anger/Revolt and Calm/Majesty. Despite its recognisable character, though,POD finds a recognisable and idiosyncratic angle.

This is mainly because the stoic development of his sustained tonal threads through subtle filter modulation is not that much of interest to Rosenthal. Instead, he is looking for primordial, hormonal reactions, for a situation which places the spectator in direct contact with the forces of nature, far away from the comforts of modern society. With this idea in mind, Dave Bowman is not a hero, nor necessarily a personality for easy identification. Just like almost everything else in 2001, he is a metaphor, a flesh-made emotional or intellectual construct, which, through gestures, expresses what can not be expressed in words.

Similarly, the music relies on the force of suggestion. It uses dynamics and hardly noticeable changes in key as its main tools and as subliminal effects for unsettling the listener: Shining major chords dissolve into hollow and haunting minor moods, while aggressive ambiances give way to passages of great clarity and certainty. Vice versa, mellow sound baths always hold the potential to swell into threatening sonic jugulars with deep red blood pulsing underneath pale white skin. There is not much room for variation of this concept, but the reduced timbral palette and the restricted arrangements only serve to make the overall atmosphere more claustrophobic and mesmerising at the same time.

As an experiment, I used POD as an alternative Soundtrack to 2001. The result was surprising at first: Where it replaced Strauss and Ligeti, it was even more oppressive and dense. When it filled the silence of Dave Bowman's isolation, it however made his plight more agreable. On second thought, this is a logical conclusion of Rosenthal's purposely emotional approach, which sets him apart from the cliches associated with Dark Ambient: The more his pieces remain recognisably "musical“, the more they offer a component of comfort. This only goes to show that he went for the right protagonist. Who would have wanted a record on that boring beaurocrat Haywood Floyd, after all? - Tobias Fischer

I have a Patreon page for my music. www.patreon.com/blacktapeforabluegirl Patreon is a crowdfunding site built for "empowering a new generation of creators to make a living from their passion and hard work." This is where dedicated fans of my work with Black Tape For A Blue Girl and As Lonely As Dave Bowman sign on to provide ongoing support on a monthly basis to assist me in following my muse. In exchange, they get unreleased (and possibly never-to-be-released) music every month. Thank you so much to everyone over there!