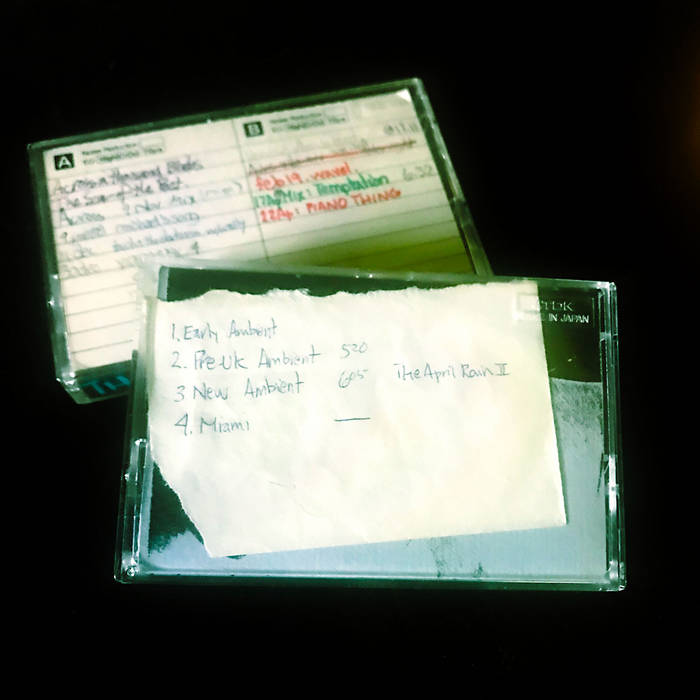 Here's 47 minutes of music from the final two cassettes in the ASHES IN THE BRITTLE AIR era. All in all, it’s not really ASHES music; however, as I’m on a quest to listen to everything that might contain useful bonus tracks for ASHES 30 I’ve transferred the relevant bits for you to check out. Lots of ambient music this time.

The previous transfer – Cassette Volume 10 – ran through September ’88. Some of this material was recorded simultaneous, and some of this is from after I had finalized – and probably even mixed – ASHES. Keep in mind that (according to Google) ASHES was released June 15 1989. I probably put it into production in March ’89.

The A-side of this cassette has the album mixes of ASHES IN THE BRITTLE AIR (probably dubbed from the 2-track so I could listen outside the studio). The B-side has ambient tracks. These are multi-track recordings; I checked in my boxes in the basement and I have these on an 8-track reel which also contains the 2nd half of “through sky blue rooms” and a few other bits. It seems an odds-and-ends reel from when I was getting the ASHES 8-track tapes in order. For each album, I’d move the multi-tracks around until they were on the tapes in album order. This made it easier to keep track when mixing.


Vol11-1 Early Ambient
I think “Early” in the name means that it is from earlier than the ASHES album.

Vol11-2 Pre-UK Ambient
From before I went to England to record with Sue. That puts it at April or May 1988. The chords sound so familiar – “The lingering flicker” off THE ROPE maybe?

Vol11-3 The April Rain ii
THE APRIL RAIN was one of my early ambient releases (from 1985). I guess this song had a similar mood?

The first side of this cassette has some rough mixes of “Across a thousand blades,” “Michael’s song” and “The touch and the darkness.” I was hoping I’d find something interesting, but they are pretty close to the album mixes and the tape is garbled at time.


Vol12-1 Conjuring
The j-card says “Video Music 4” – this piece goes along with Vol9-1,2,3 from the previous cassette. You can hear part of “Egyptian” in here so I’m guessing it was rolling live out of the ESQ-1’s sequencer and I flipped to the next sequence. This suggests I was wrong last time in my hypothesis that those songs were MESMERIZED-era, as they are on this cassette after ASHES rough mixes.

Vol12-2 17-minute ambient
I think I might have performed this piece live directly into the ESQ-1’s sequencer. It's long, maybe I planned to take “the good parts” and make something from them later.

Vol12-3 Wavelength
Feb 19 1989. As mentioned above, this is from very near the end of the ASHES session. I suspect I was being prolific and already working on music for the next album. This has the mood of other demos from previous cassettes, I think it has “something” that could have evolved into a useable track. As you know from other demos (such as “Across a thousand blades” or "The touch and a darkness"). some pieces had an inkling – a hint – of something good in the mood; but they required revamping, augmenting, ripping apart and rebuilding. The 2nd part is a different sequence, so once again I was running live out of the ESQ-1, and then I flipped to the next one. Never got around to seeing where this could have gone.

Vol12-4 The christ in the desert (early)
17 April 1989. This goes into the “Wow! Who knew it was recorded so early!” category. This track appeared in similar form on THIS LUSH GARDEN WITHIN – which Google tells me was released May 5 1993. I recorded this song after I had finished mixing ASHES, when I was beginning to work on tracks for A CHAOS OF DESIRE. I didn’t think it fit CHAOS and held it for 3+ years for the next album, LUSH GARDEN. Interesting! On the tape, the track is called “Temptation” as the lyrics are influenced by the film THE LAST TEMPTATION OF CHRIST – which came out August 12 1988. I saw it in the theater with Walter Holland.

Vol12-5 Tear love from my mind (early)
22 April 1989. You can get an idea how (in my mind) ASHES and CHAOS were kind of one long studio session; I was already working on the next album before ASHES came out. At the time this song was called “Piano Thing.” On an earlier cassette we learned that “Could I stay the honest one” also began as a track from the ASHES sessions.

And that's a wrap on another two cassettes!